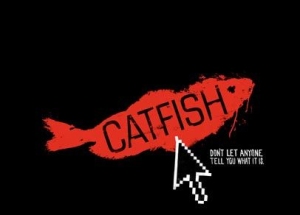 I know we have a lot to watch on Monday nights as it is between BBWLA, Teen Mom 2 and which ever Housewives are on Bravo currently. If you have the energy or DVR, I’d like to bring a new show to your attention. It airs Mondays at 11PM after Teen Mom 2 on MTV. It’s called Catfish. It’s based on the 2012 movie of the same name. The show is hosted by the guy from the movie and he’s helping people meet their online “loves.”

Monday we met a 21 year old girl from Arkansas. Don’t worry, I don’t know where Arkansas is either. She had been in a “relationship” with someone named RJ who allegedly lived in LA, was a model, wrote cue cards for Chelsea Handler and was taking online anesthesiology classes. I didn’t know University of Phoenix even had a medical school but these days you never know. The girl had never seen her “love.” She never Skyped or Facetimed with the modeling, cue card writing online medical student.

Long story short, they take the girl to meet her online “boyfriend.” Come to find out her “boyfriend” wasn’t even a boy. RJ was Chelsea an 18 year old butch lesbian virgin who smugly claimed that she used that fake Facebook account to have tons of relationships with unsuspecting girls. Apparently the aforementioned butch lesbian got bullied in high school and is using the Internet to get some kind of revenge. Honestly, I tuned out for the “it gets better” segment.

There’s something hilarious about seeing people find out that their “relationships” don’t really exist. From the preview, next Monday’s episode is going to be amazing; amazingly messy. On Monday we will meet a synthetic wig & black lip liner wearing stripper who is waiting to meet her online beau who is also a stripper. Once there’s a synthetic wig and a stripper reality TV gold is sure to follow, remember Joseline?

Have you seen Catfish? Will you be watching? Comment below and let me know.