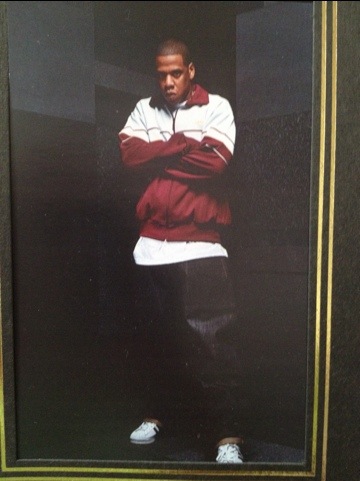 Over the weekend I learned Rocawear is now selling “Occupy All Streets” shirts for $22 and there’s been no talk of any proceeds going to the Occupy Movement. Some people find this offensive and are saying less than flattering things about my Brooklyn Brethren, Jay-Z. I do not share those sentiments because I’m jaded to say the least. Let’s start with fact Jay-Z sold Rocawear in 2007 for over $200 million (fact courtesy of VH1’s Pop Up Video). If you were unaware, that 1 deal alone would make him part of the 1%. Add the money he made for those sneakers, 40/40, and all of  his #1 albums, then you can see why he remixed Weezy’s song talking about a “Billie a billionaire.” I digress. I spoke of Rocawear’s sale to say since Jay-Z is no longer an owner and isn’t really designer, he may not even know about these shirts.

You’re probably thinking “of course he knows,” and with that I would probably agree. Think of this like the time Beyonce did songs with Lady Gaga. Some people claimed Mrs. Carter didn’t need to collaborate with Gaga. The truth is, just like Bey did a video with lesbian undertones (I mean really, if that honey bun scene wasn’t gay, I don’t know what is) to stay relevant, it isn’t surprising that Jay-Z or arm of something of which he’s affiliated did the same thing to stay relevant with the most popular protest that did start in the street; arguably just like Jay-Z did.

I’m like you, and I like to think Jay-Z in addition to being from the ‘hood is for the ‘hood. In ’08 after paying $200 to see him at the Garden, Hov told me to vote for Obama and I did. I was going to vote for Obama anyway because I didn’t think McCain had the right life expectancy to have his finger on the button that we hear so much about. Jay-Z has given out toys in the projects on Christmas day. In addition to doing a concert to benefit The Firefighters, Hov also gave money to help victims of Hurricane Katrina.

No one can deny Jay-Z has done good things with his money and influence. Well, Newark might disagree since in true BK fashion, Jay-Z took the Nets. Again, I digress. My point is that while we like to think that Jay-Z is still for the 99% he’s part of the 1%. When someone has enough money to call themselves the Black Warren Buffet we shouldn’t put anything past them. After all, what we call money he pays more in taxes. 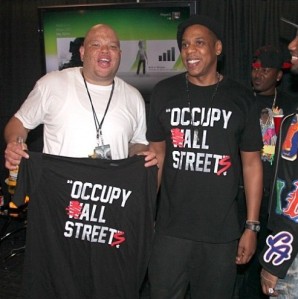 After writing the above post, I came across this image and knew I had to share. As the picture shows, Jay-Z is VERY familiar with the “all streets” version of the Occupy shirts. Does this change anything for me? No. As I told you originally, Jay-Z is part of the 1% and staying relevant is his bread and butter so I’m not surprised. The rich will always do things to get richer. Further, I think hijacking a movement for your own purposes takes nerve and anyone who knows me, knows I’m always impressed with people who exhibit that kind of self aggrandizement.