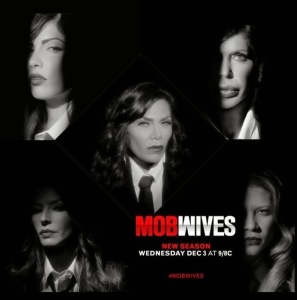 Last month Mob Wives returned to VH1. One of my good girlfriends asked me to give a few thoughts on it and as you know, I rarely (read probably never) turn down requests for my opinion. Let me begin by saying that I think this may be my last season with Mob Wives. The only thing worse than an old woman is an old desperate woman. Everyone on this show is hanging on for dear life. I think it’s time for VH1 to put them and me out of the collective misery.

Am I the only one tired of seeing Victoria Gotti’s old frozen face? She’s clearly trying to get back on TV and I am nowhere here for it. First, she took that hard face to RHONJ to give Teresa Giudice’s ol’ convict ass some tea, now she’s on VH1 eating off her daddy’s criminal name. Now that I think of it, I’m pretty sure her conversation with Big Ang is what turned me off from this franchise. The two of them sat together looking like old shoe leather talking about what a “gentleman” her father was. I was on my couch like, bish what? I guess gentleman  and murderous criminal mean the same thing in Staten Island. That conversation made the show “real” for me. These women are eating off of the names of men who destroyed countless families and committed more felonies than Bobby Shmurda and the Gun Squad.

I wonder what would happen if a group of Black women came on TV with their husbands’ criminal past as a claim to ‘fame.’ Where are the widows, Baby Mothers, wives, daughters, etc. of Freeway Ricky Ross, Wayne Perry, The real 50 Cent, Supreme, Frank Lucas, Nicki Barnes and every other relatively well known Black gangster. I’m sure these women exist. I’m just playing though. We know the Powers that Be would never let that happen.

One thought on “Messy Wives”