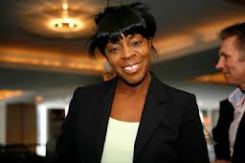 It’s been awhile. I’ve missed you. When a low down dirty monkey with a wig on attempted to shade me, I immediately thought of what an epic story it would be.

I was in the office minding my business then suddenly Ratchet Barbie appeared. She blew through the office like a ghetto Tasmanian Devil. She kept saying “do you like my new teeth? I got dental implants. Remember my old teeth?” to everyone who passed her. As if that wasn’t bad enough she was wearing $1 shower flip flops. I checked the display on my phone to make sure that we were still in February because I couldn’t believe my eyes. As Hurricane Hoodrat blew from one office to the next I caught a glimpse of her “hair.” Well, I don’t know if I should call it hair since she was rocking a synthetic lace front so far down on her forehead it was looking like a hat. I immediately dialed up my homie M. Easy because I needed a witness.

When she was finally making her way out, after telling various stories about her teeth and other tales of fake grandeur, she stopped and began speaking to us. She then proceeded to tell us that she’s “famous” and we should Google her. As she was speaking I could only hear Jim Jones girlfriend Chrissy’s voice in my head saying, “I’m mad you got your top teeth done and not the bottom.” A coworker attempting to be polite on her behalf decided to introduce her to M. Easy and me. She points to him and says “I know you’re a lawyer.” Then she points to me and says “you MUST be an intern.” I guess Black women can’t be lawyers in her small mind.

After that amount of shade, I decided to find out who exactly this woman was. I got her name then I proceeded to Google her. Ms. Diane Dixon has a bigger Kenya Moore problem than Kenya Moore. According to her Wiki page, Diane won an Olympic gold medal in 1984. Yes, ’84 as in before I was born. That wasn’t the only thing the Google Machine revealed. According to the NY Post (http://www.nypost.com/p/news/regional/item_e02g3B1XMBG9L1PQdEpRNL), Ms. D. Dixon is an alleged jump off of former NY Governor David Patterson. Those 2 nuggets of information made that whole encounter worth it.

Take aways: 1. If your only claim to fame is something that no one remembers from nearly 30 years ag;o you’re not famous. 2. Telling someone to Google you after you’ve been implicated in a sex scandal probably isn’t the best idea.

Have you ever encountered someone with a Kenya Moore problem? Comment below and let me know!