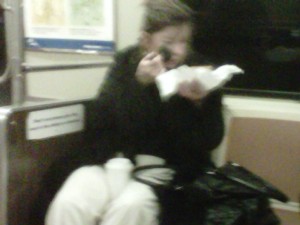 10. Men in flip flops (or sandals). Call me old fashioned but I like my men wearing socks & shoes. If we’re not at the beach I don’t want to see a man’s feet.
9. The City bus. Do I really need to expand?
8. Stores with $10 debit/credit card minimums. Besides the practice being against card policies, it’s ridiculous. Now when I see those signs and I only have one $5 item I just put it back on the shelf. I won’t be bullied into buying extra things I don’t need because some manager wants to play chicken with the Visa machine.
7. People who don’t get or choose to ignore social ques. Have you ever done everything in your power without using words (that would be rude) to show your lack of interest in a topic or person but they just won’t stop? If a person is eating with one hand and texting with the other they probably aren’t interested in what you’re saying.
6. Over Sharing. This is a big one. Some people just don’t understand that every story is not suitable for every situation. This is an icebreaker, no one wants to hear about the 3some you had last week. Save that story for happy hour or “never have I ever.”
5. Emotional Terrorism. There will be a post dedicated to this topic. It’s unfair to subject others to your emotional whims. Having a bad day you want to ruin my mood. . .think again; I’m fighting the War on Emotional Terror.

4. Fast food workers with attitude problems. It isn’t my fault you work in Dunkin Donuts. Just make my Coolatta and I’ll be on my way. Confession: When a person in the ice cream shop gives me attitude I order a half gallon and make them scoop it by hand. I doubt it’ll actually teach them a lesson but it’s my own little retribution.

3. Gentrification. I’m all for revitalization but too many places are losing their character. Not only that, I’m tired of watching the news after the weekend shootings that are nearly certain to ensue and seeing the 3 oblivious transplants saying they can’t believe such a thing c0uld happen. Really, you can’t believe someone got shot at 3AM, in the summer, in Brooklyn right after a shady bar closed?
2. Public application of makeup. I don’t mean lip gloss but something about seeing a grown woman try to apply eye liner between train stops is more annoying than words can express. If your makeup routine is that serious, wake up 10 minutes earlier and spare the public.

1. Staunch social conservatism. I’ll dedicate a post to this too. It’s 2011 and this is America. New York just passed a bill legalizing gay marriage. Why there’s still a “debate” on gay marriage is beyond me. If you are against gay marriage, birth control and premarital sex, marry someone  of the opposite sex who you didn’t smash before the wedding and don’t plan your parenthood; don’t try to take away all the good stuff from the rest of us.