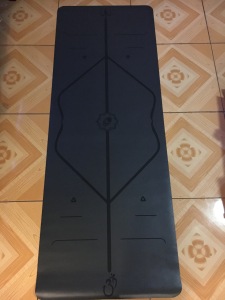 You know I’ve been on the fitness wave lately. Out of all the workouts I’ve tried, it’s been the hardest to get into yoga. I was ready to skip yoga altogether until my chiropractor recommended it because I need to strengthen my back muscles which will help with my chronic pain.

Hot vinyasa flow is my favorite as well as the fusion class at Sync studio. Growing in my practice I’ve learned that all yoga mats are not created equal. The more I practiced the more I noticed the little things like slippage during down-dog and the need for support. After finding a couple classes I enjoy I decided it was time to invest in a good yoga mat since I would be a repeat customer. I did tons of research. The names that kept coming up were Manduka, Jade, Gaiam and LuLuLemon. I started following a bunch of Black yogis on Instagram and that’s how I learned about the Liforme yoga mat. At first I balked at the idea of paying over $100 for a yoga mat. Thankfully, I was able to try out the Jade and Manduka mats at a couple studios. The Manduka had good thickness but I still had some slipping. The Jade mats were thick but heavy so it wouldn’t be practical to carry along with a gym bag and the things I need for my workday. After seeing a review on Youtube I finally decided to bite the bullet and get the Liforme travel mat. It costs $115, weighs 3.5lbs and comes with a mat bag. The only difference between the travel mat is the thickness a few millimeters of length and width and the weight. I opted for the travel mat because there are days where I go to yoga after work and I need everything to be light as possible since I already have to carry 2 laptops with me daily.

I first used the mat at a hot pilates class. Before, I always used a mat length towel because I would slide and slip without one. With the Liforme mat, I actually found myself pulling back the towel to getting a better grip during forearm plank. The stickiness does hold up. I sweat like a beast. The mat absorbed all moisture and remained grippy throughout the entire hour. The mat was just as grippy during a hot vinyasa session the following day. While the mat is thinner that my old no name mat, I didn’t feel stress the same stress on my joints during cat-cow and other all fours positions.  The alignment lines helped me correct myself and better form is always better. I also didn’t realize how much time I wasted worrying about slipping until I no longer worried about slipping with the Liforme mat.

The Liforme does not have an odor when you first get it and it does come with a booklet of directions about cleaning and care for the mat. So, if you have a regular yoga or pilates practice at home or in a studio that doesn’t give complimentary mats I say; splurge.

Have you ever splurged on a yoga mat? What kind was it? How did it work? Comment below and let me know!

2 thoughts on “Liforme yoga mat, save or splurge?”